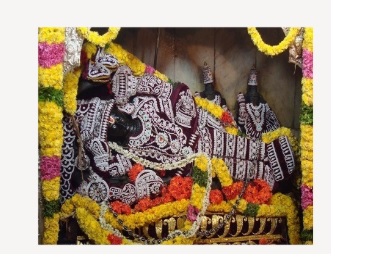 History and Architecture of the Temple

Sri Ranganathaswamy Temple was established by Pallava kings in the 7th century. The temple was later developed in 12th century by the king Raja Mahendra Varma. The 7 leveled main entrance gateway Gopuram, which actually means wind tower, stands 70 ft tall and it appears huge. It has 10 feet of gold-plated vessels on top of it, called KalshamThe images of Saints, Lord Brahma, Lord Vishnu, Lord Maheshwara and sculptures reflect the architecture brilliance.

Sri Vishnu Sahasranamavali or the 1000 different names of Lord Vishnu are displayed on the walls of sanctum sanctorum. Devotees chant Sri Vishnu Sahasranamavali while doing the parikrama around the temple. The idol of Lord Ranganathaswamy is seen in the reclining posture on Anantha. The temple also has a mirror house which is an major attraction for the devotees. There is a separate shrine of Goddess Rajya Lakshmi Devi towards the south of the main temple and shrine of Goddess Andal Ammavari towards the north.

Legend of the Temple

According to the legend, Lord Vishnu decided to visit Bhoo-loka along with his consort Goddess Sridevi. He asked Adisesha to be the place as Lord’s abode to stay at Bhoo -loka. Following the order of the Lord, Adisesha took the form of a mountain at this place. Hence, the place is known as Talpagiri Kshethra.It is believed that saint Kashyap conducted Poundarika Yaga on Ekadasi day here to please the Lord. At last, the Lord appeared and blessed him.

Every year, the festival of Sri Vari Brahmotsavam is celebrated during the month of March – April.Vaikunta Ekadasi has also celebrated annually which is witnessed by many devotees.

By Road: Buses are available from all major cities in Andhra Pradesh to Nellore from where the temple is 3 km away.

By Train: The nearby railway station is Nellore which is 4 km away.By Air: Tirupati Airport is the nearby airport which is 127 km away. Bus and taxi services are available to access the temple.

Poojabaskets.com is related to all Pooja items & few general items you can find all Pooja items at one place.We have started service in 2018 with an idea to provide you the best services about Pooja items & services.And we have a separate block for astrology where well known person  Subramanyam Sarma garu will provide Astro reports & remedies accordingly .Starting from General Pooja items to Bulk deliveries,  we will provide all kinds of items with in timely manner.Whatever the event either big or small poojabaskets support or presence will be there in all aspects.We provide the best services and we will offer you the best deals .One thing we can say that we will work hard to keep our customers happy.We offer you products for best price!!! Our continuous follow up and update definitely can win our hearts and As a young team we will always support you in all aspects